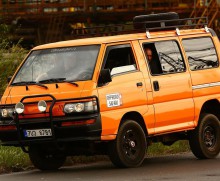 We call her „booth“. Initially it was used for carrying of hot-air balloons and their crew. The next owner travelled with this car throughout the whole Balkan peninsula. Finally it stayed with us and replaced the original Jeep XJ. 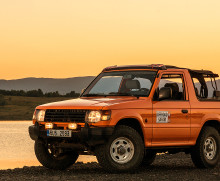 We usually take this good-looker for a ride when the weather is nice. You can get a ride with this car when you choose some of our trips or book it for VIP drive and use it exclusively for you. The route will be discussed to meet your needs. And If you want you can try also off-road driving.

What is the price? A private 6 hours tour with the guide cost 499 EUR. One person or three people, the decision is up to you. The price is counted for the whole car. 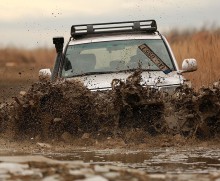 Before we acquired this Toyota car, it drove as an accompanying vehicle for enduro expeditions to Africa. This car most often cruised sand dunes in Tunis and Morocco and experienced there its fifteen minutes of fame. You could noticed it on TV channel Prima COOL in Moto cestou necestou, a series which was devoted to adventure trips of Czech celebrities. 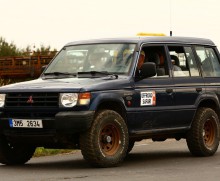 History of this vehicle reamins a secret for us, nowadays it is mostly used for private group trips, since 7 people can comfortably fit in. Before it became ours, it served to geodets. It is a perfect vehicle for families of off-roades, since while it is perfect in a terrrain, it is quite easy to get in and to get out of it. We call her Snow White. It could easily be Scheherazade though, since we found her on a turkish market in Germany. It has the strongest engine in our fleet, ariconditioning and a roof window. 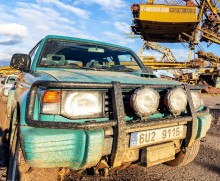